Every beer brand has a backstory.
Some are more interesting than others.
Many are pretty cookie cutter.

Tell me you haven’t heard this one before: Two college buddies quit their corporate accounting jobs to Bro out with each other all day, every day, at a tap room they started in an empty office park.

The backstories that endure capture a certain founding “spirit of beer.”

Like Pabst Blue Ribbon, for example: Jacob Best, Jr. and his brother, Charles Best, immigrated from Germany to Milwaukee and started a vinegar works. It eventually pivoted into a brewery, which then catapulted into one of the nation’s largest brewers after the Great Chicago Fire of 1871 destroyed other brewery operations in Midwest.

Or Sierra Nevada Brewing Co – In 1980, with $50,000 in loans from family and friends, Ken Grossman and Paul Camusi started a brewery in Chico, California. The two bonded over a love of home-brewing. 40 years later, their business gets widely credited for giving birth to the craft beer movement. Just like PBR, you’d be hard pressed to not find Sierra Nevada in the beer aisle of pretty much any grocery store in America.

Or Jim Koch – The Harvard grad who quit his consulting job in the ’80s to brew beer in his kitchen using his great-great grandfather’s 1870s recipe. He took Boston Beer public in 1995. He’s a billionaire now – also one of the first beer titans willing to put a company name with a face, starring in national commercial spots for Sam Adams.

What Is Island Beer?

The Island Brands Beer has some parallel through lines to the ones above: Friendship, good times, and a viable need in the wider beer marketplace for a truly crushable light beer.

It also has one hell of a backstory, born out of a problem and a pivot.

Island Brands founders, Scott Hansen and Brandon Perry, started dreaming up their beer brand after a sailing trip from Key West to Cuba.

“You can’t drink the water,” Brandon explains. “Cause it’ll make you sick. So you start drinking the beer, you know, to stay hydrated.”

“But there’s only two beers in Cuba – the dark beer and a light beer. And both of them are pretty bad, man. They’re not good. The beers are like low quality lagers. I don’t even know what the dark one is. It wasn’t good, man.”

That was the problem. Therein, the opportunity. So Brandon and Scott started dreaming about bringing good beer to Cuba.

They made some lasting friends on a Havana night filled with cigars and rum, putting together a plan.

“When we were in Cuba, we were like – ‘Man, these people are awesome. They deserve better beer,” Scott explains.

“So we started talking to some restauranteurs and some bartenders while we were there. We ended up forging some pretty cool relationships on a rooftop in Havana while smoking Cuban cigars and sipping on some beautiful rum and just hatching a plan to get these guys some quality beer.” 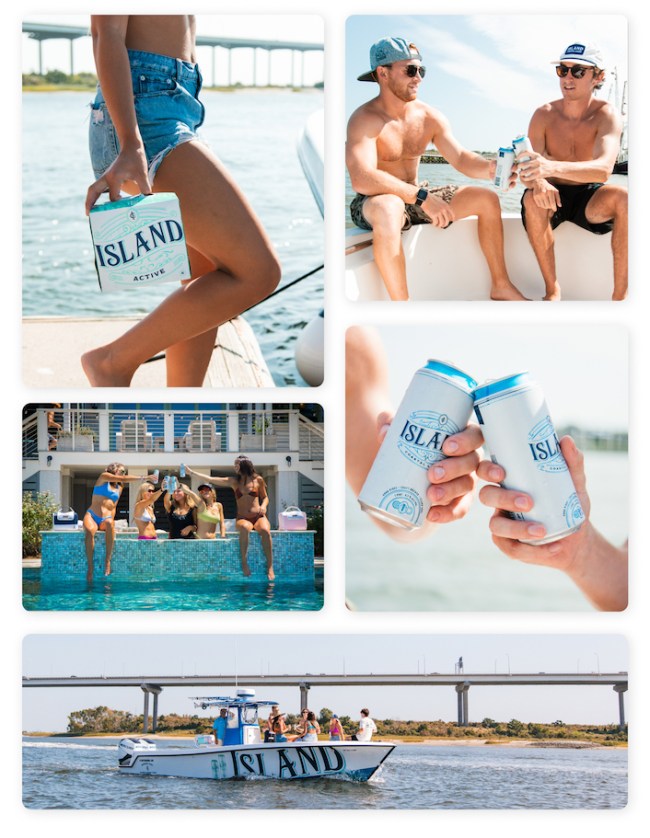 The only way to make it happen? Pull the the kind of international business dealings usually reserved for state departments and secret intelligence agencies.

To get Cubans good craft beer, they’d have to pull similar dealings to what Warron Zevon sang about in “Lawyers, Guns, and Money.”

“The only way we could get them beer was through the Russian embassy. We were game for it. We were like ‘let’s figure it out!'”

“When we got home, we created a company called Havana Craft Imports to import craft beer into Cuba. Then we started doing a little more research…”

The game plan was flawed.

The business, in concept, was a total failure.

“We were never able to get the beer into Cuba.”

Scott intervenes: “We wanted to go back. We were trying to figure out how to go back to Cuba in 2017 for the Rolling Stones concert back so we could go meet the buddies that we had met, smoke more cigars, and hopefully get them some beer.”

Scott and Brandon are both serial tech entrepreneurs. They both sold their respective companies – One an SaaS that “morphed out of a consumer finance company” and one a B2B focused on the tech staffing space. It “exited to a Silicon Valley firm to grow really fast.” As entrepreneurs, they get pivots. They understand why it’s important to keep the dream alive. So they pivoted away from the import business concept, giving birth to Island Brand Beers.

“Man, rather than just send them American craft beer, let’s create a product that would pay homage to them, in terms of like who they are? What would the beer be that they would want to create for themselves?”

“So we started designing Island’s product – it would have super high quality ingredients and be made brewed following German Reinheitsgebot – the legendary beer purity law (that all beers can only be brewed with hops, barley, water and, later, yeast).”

“So we called it an Island. The filigree is like a cigar label, right? Yeah.” 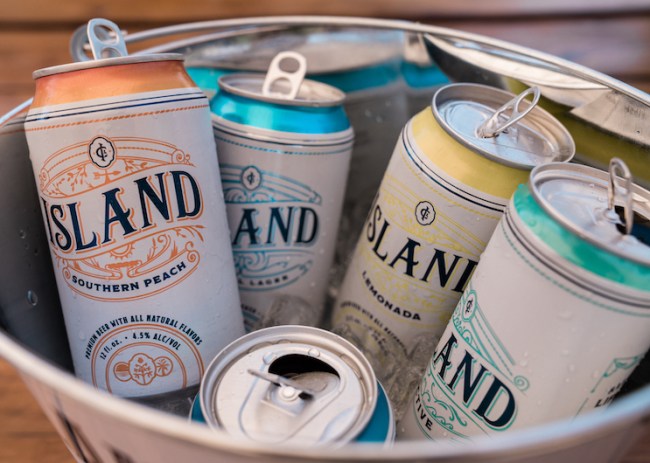 And the colors on the can? As exact as they could be to the color of the water in Varadero, Cuba.

This required working directly with the canning manufacturer to match the azure waters. The had to shut the plant down in Colorado to “sit with the dudes in the lab coats” to get everything to match for their initial can order – 280,000 cans in total.

“Using pictures,” Scott explains, “We matched the exact color of the top of the can to the water of Varadero in Cuba. And the white represents the beach – the white powder sand.”

“And then we created a crushable beer.”

Island Beer Brands is a lifestyle beer. It’s not craft beer. You can’t go buy it in a remodeled warehouse to drink it around the vats it was brewed it. Because it wasn’t meant to be drank like that – Island Brand Beer is beer for boats, beaches, bars, and backyards. A clean and easy-drinking beer vs. a high calorie hazy monster. 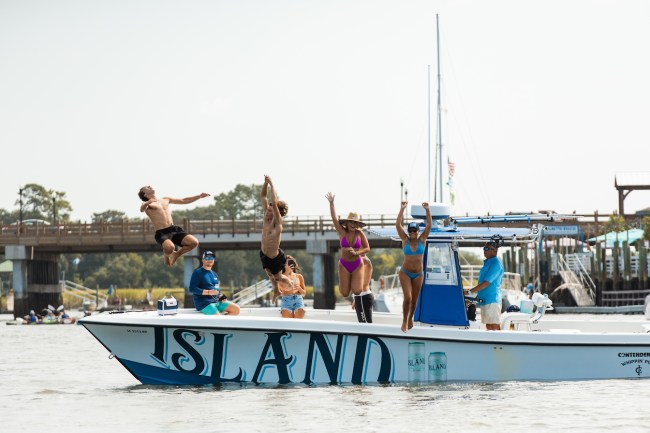 In 2018, Brandon and Scott started carving out their own unique lane for the brand, focusing on growing a customer base as a better for you option in beer game.

“We started looking at the data and we’re like… Woah. The domestic US is consuming $6 billion worth of Mexican import beers every year. Like. What? Why are people drinking that? It tastes terrible.”

“The first thing they tell you when you go to Mexico is don’t drink the water, but we’re importing it into the US and everyone’s crushing it.”

Mexican import beers dominate as a lifestyle beer shows you how much of beer is just really clever marketing.

“They did that Feliz Navidad commercial back in the day, then they went on like a 30 year run, convincing people that, you know, that’s their vacation in a bottle. But really – it’s just a postcard. It’s very surface.”

After two years of tweaking their recipe, Island Brands made a splash around the Southeast with two premium lager beers, brewed with no fillers, GMOs, preservatives, or artificial flavors. Their beers are only made with the good stuff: malt, hops, yeast, and water.

No cheap filler ingredient that other domestic beers, like corn or rice.

“We started looking at the domestic US market and we discovered that craft beer is only 15% of the market,” Scott offers. “How come no one’s going after the big guy?”

“No one is going after the big guy in the grocery store cooler with a better-for-you-brand that’s high quality, that’s the same price. In our naivety, we thought that that would be a good idea. But, as you know, it’s David and Goliath. You know what I mean? We’re going against corporate conglomerates….”

So they started thinking about shelf-space in grocery stores:

“Let’s call on Publix. Let’s see if we can get this beer in Publix.”

With increased demand, they rolled out two more SKUs: Island Southern Peach and Island Lemonada, inspired by the coastal lemon groves along the Mediterranean. They even sponsored a buddy’s car in the Baja 1000, tagging along for the entire ride.

“We built a beer for ourselves,” Brandon adds. “It was the beer that we wanted that we thought would appeal to everybody else… you know, when standing there in front of the cold box, in the grocery store and you want to make an informed decision.”

Building a future of fun

To crank things up a couple notches so they can start having some real fun with Island Brand Beers, Brandon and Scott took to Start Engine for a Reg CF offering. It’s open for investments from fans until mid-June 2021.

The crowd-sourced funds they raise are going to be used to fuel Island Brand’s growth and expansion.

The guys have all kinds of things in the work: An Island Cabana bar in coastal waters as a sort of consumer hub for hanging out, for example. Loyalty programs. An app called the Island passport app to help with customer and retail data. Merch and music.

“We have now 42 different nonprofit partners that line up with each of the distributors that we sell beer to.” Scott explains that the list includes veteran-focused nonprofits. “That is a big part of who we are – we always say we don’t subscribe to one thing. It’s everything we have to be smarter. We have to just be more authentic (than the competition)”

“Very soon we’re going to be launching in Mississippi, Louisiana, Texas. We’re bringing out the best of breed talent. We’re gonna roll this out nationwide and, hopefully, emerge bigger than some of the brands.”

“We obviously are getting more buttoned up as an enterprise – we hired a former Anheuser-Busch dude who’s got the secret handshake in the beer industry.”

“We’re having so much fun with it. And it’s not seen as all the things that we love that, um, you know, I think we’re like in chapter one of a very long book.”